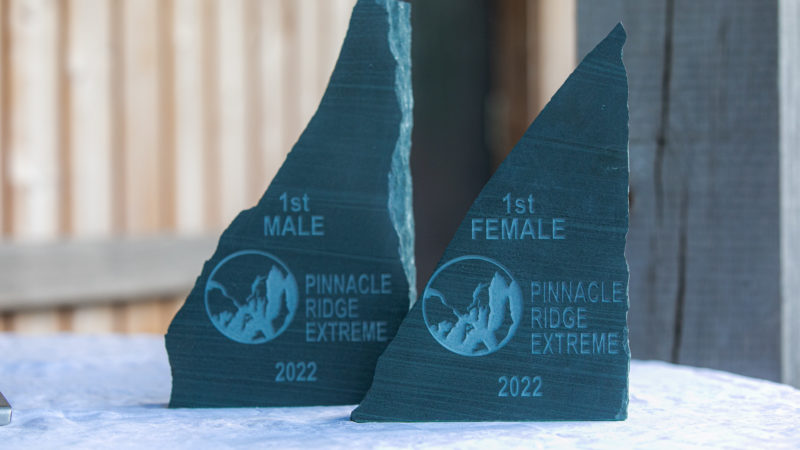 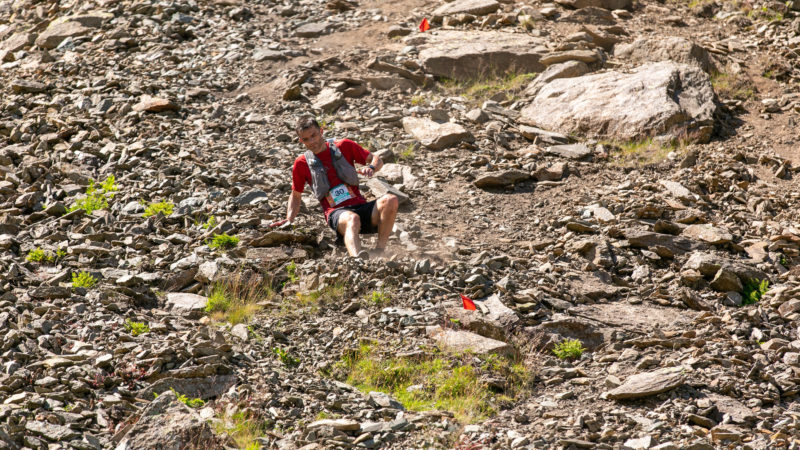 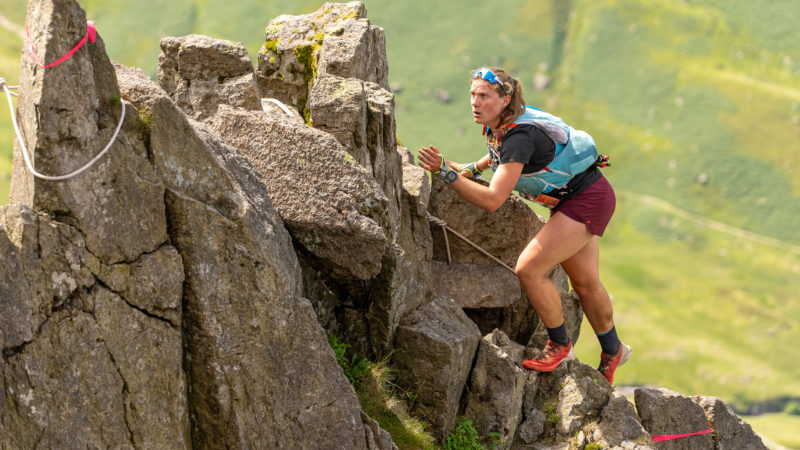 After the previous days heat delivering the Rab Lakes Sky Ultra, I knew it would be a hot one and going outside to water our garden at 06:00, it was confirmed as I hit the wall of heat... so early in the day.

08:00 soon rolled on and sky racers were ready for registration to open. With numbers being collected, trackers being taped on to the runners race vests, the events team were gearing up for one seriously hot day.

Again our focus with the safety team was managing over heating and issues related to heat and sun. The safety team for the Rab Pinnacle Ridge Extreme is larger than for the Rab Lakes Sky Ultra, having 4 graded scrambles to tackle on route from the start to the finish.

Marshals were again deployed and our course prover was out making sure all the flags were still in place, connecting the areas still in use from the LSU the previous day.

09:50 came and a warm up with Georgia Tindley, Rab sponsored athlete, to get everyone legs and joints ready for the onslaught in the Helvellyn Massif and surrounds came. Carmine De Grandis, a good friend originally from the Italian Dolomites, revved everyone up to a rendition of La Bamba on his small accordion.

10:00 came and runners from all over the UK and Europe stood ready on the start line, the sun baking down and the heat of the day apparent.

On the Rab PRE there are no checkpoints, its a pure mountain sky race traversing hard to access locations taking on some of the most extreme and severe running terrain in the Lakes.

The race is relatively short in comparison to the Rab Lakes Sky Ultra, but that doesn't make it any easier and the element of self-sufficiency makes it that much harder again.

As the race developed, leads were opened by the front runners and the leading lady was fighting back from a wrong turn up the upper section of the Glenridding Valley. This made it obvious there was need for an extra marshalling point where this error was experienced or slightly better route marking, we will be sorting this for 2023.

I have to say we were slightly nervous still with the race timings, as being a shorter race, ideally we do not want to have to start it super early, we don't want to have fouled up with summer mountaineers and tourists on the ever popular Edges of Helvellyn, however the racers reported being surprised there were not as many folk as last year on The Edges, however we will still be looking at the race timings for 2023. The best race experience is what we are after for you and other mountain users alike, so consideration will be made for this in the best way possible.

With the Edges under everyones belts, runners now had to just drop into the valley of Grizedale, before the 'oh so' gruelling ascent to Pinnacle Ridge, the jewel in the crown of the race.

The race safety team were on high alert, as Grizedale from midday onwards, in the heat is a hard place to climb out of and many runners were already displaying signs of heat stroke/exhaustion and whilst many of the runners were 'dunking' themselves in streams, becks and rivers as they passed them, the ascent to Pinnacle Ridge can take the best trained runners down.

Provisions were put in place to allow racers to decide whether Pinnacle Ridge was worth it for them in the heat and a few took the sensible but easier option of traveling down the valley and back into the events centre to retire with valour and come back the following year to tackle this beast once more.

One runner did however collapse at the foot of Pinnacle Ridge, overheating as was our nervousness, soon to recover and walk out with the events safety team.

To the 2 runners we had to close the Pinnacle Ridge section to, we are extremely sorry, but the emergency we experienced warranted it and we appreciate your understanding and hope to see you tackle the race again in 2023.

Andrew Lamont took the winning position for the Mens Race, being crowned the champion of the Rab Pinnacle Ridge Extreme for 2022, with Georgia Tindley putting in the performance for the day in not only taking the win in the Women's Race, plus setting a new course record taking 28 minutes off what Kristina Aluzaite had set for 2021, she placed 5th overall and without the 2km detour she took, would have stood on the mens podium as well as the women's.

Georgia Tindley completed the course in 05:02:57 just missing the sub5 hour mark she set herself.

With the champions of the race back in, all eyes turned to making sure the rest of the competitors were very well looked after and arrived safely back at the King George Playing field in Patterdale.

Another addition to the races for this year was the step up of the finish line food. For years I have become tired of the junk experienced at many races throughout the UK, masquerading as food.

It is about time we made that change and this year was the start of it. Ordinarily many race organisation deal out sweets, sweet junk food, more sweet junk food, cordial with excitotoxins laced into the mix and all manner of general rubbish that we pretend is food.

For years we have toyed with the idea of having local meats, cheeses, good quality cakes and produce and this year we made the move towards that idea. Meats, cheeses, locally made spicy lentil soup from FellBites, Wilfs cakes, quality produce, vegan selections and fruit were available at the end of the race and for 2023 we will be looking to grow this element.

After all, we are all running and training to stay fit and healthy and there is nothing worse than when you take from a checkpoint or finish food stall, to find out there is really only junk available to replenish our tired bodies with.

On top of the finish line food, we had found out days before the recent Rab Scafell Sky Race, that we had no cider. The production of the cider has kept going throughout the last couple of years, but we have not had the facility or capability to bottle it. Last year a pint was handed out as a liquid medal, as we really do not like waste at all. The bottles used to be great as they are directly recyclable or can be used as a momento. A participant in years gone by, made one of his bottles with the specific race logo on it, into a lamp with green liquid in. Our moto is "do not produce it in the first place and then it doesn't need to be recycled" or something similar to that phrase.

It might seem small fry to some folk, but even the idea of creating a race medal, that at some point in its life will need to be recycled or worse end up in landfill, really does not resonate with me and whilst I understand a bottle and label have waste and energetic production issues, it seemed a lesser evil as it was cider produced by my own and extended families efforts in our local area.

Therefore, when we couldn't fix the cider issue for Scafell Sky Race, we did think about it for the Lakes Sky Ultra. We were unfortunately very busy between Scafell Sky Race and the Lakes Sky Ultra with a multitude of things and so came up with an 'edible medal' idea and worked a plan to create some locally produced gluten free biscuit medals for the races. Local cafe, Chintsy's in Keswick, stepped up to the challenge and produced us the best edible medals they could in the time frame they had. We know they weren't the sweetest of biscuits, but they seemed to fit the bill and know they work well as a dunker in a cup of tea or coffee.

We'll be working on a better solution for the 2023 events

We are very happy to say that the weekend will be growing, adding weight to the already exciting sky racing weekend we have already created.

Things on the cards are a purist uphill only race to the summit of an iconic mountain close by, shorter sky races and of course some lower level trail and family races so all the family can come and enjoy the experience that only the 'Lake District Sky Trails' team can deliver in the UNESCO status English Lake District.

I would like to take this opportunity to say a huge thanks to our overall race sponsors; Rab UK, our supporting sponsors; The Climbers Shop, our event partners; Voom Nutrition, Mountain Fuel, Leki UK and the John Muir Trust.

I would also like to thank the Land Owners and stakeholders for allowing us to delivery these highly technical and extreme races in our home area.

A massive thanks of course goes out to our awesome marshals team, our mountain professional safety team and all the competitors for supporting our races and making them what they are.

We can plan all the races we want to, but they would never happen with out volunteer marshals giving up their weekend to make delivery possible and of course all the competitors who have the confidence we are able to deliver some of the best organised and supported races in the country of their type.

That wraps up my race report, so all there is left for me to say is:

Enjoy your summer of running, remember to look out for entries opening on the 1st of October.

The race date for the Rab Pinnacle Ridge Extreme will be in July 2023, we have a few loose ends to tie up before we announce the actual weekend, look out for more news very soon.

We look forward to seeing you in 2023 for more EXTREME Skyrunning,

Charlie and the LDST Team

For 2023 we have decided to start the entries opening with early bird pricing. From 1st Oct to 30th November is Tier 1,... 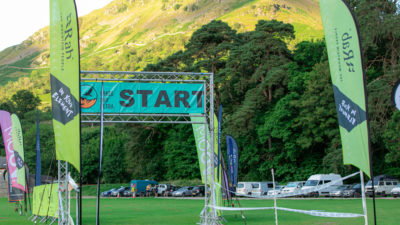 Charlie's write up from the weekend of technical and extreme sky racing in the English Lake District. The Rab Lakes...