Prepare yourself for a journey across some of the highest ground in the Lake District, taking in summits including Harrison Stickle, Pavey Ark, High Raise, Green Gable, Great Gable, Scafell Pike, Broad Crag, Esk Pike and Bowfell as you cover the 40km+ and 3500m of ascent in a horse-shoe loop from The Stickle Barn in Great Langdale. The course sweeps you through some of the most breathtaking landscapes in the central Lakes via the finest single-track paths in the region.

[If you do not reach Styhead Pass by the cut off above, you will be short routed back to the finish via an easier route and more direct - marked] 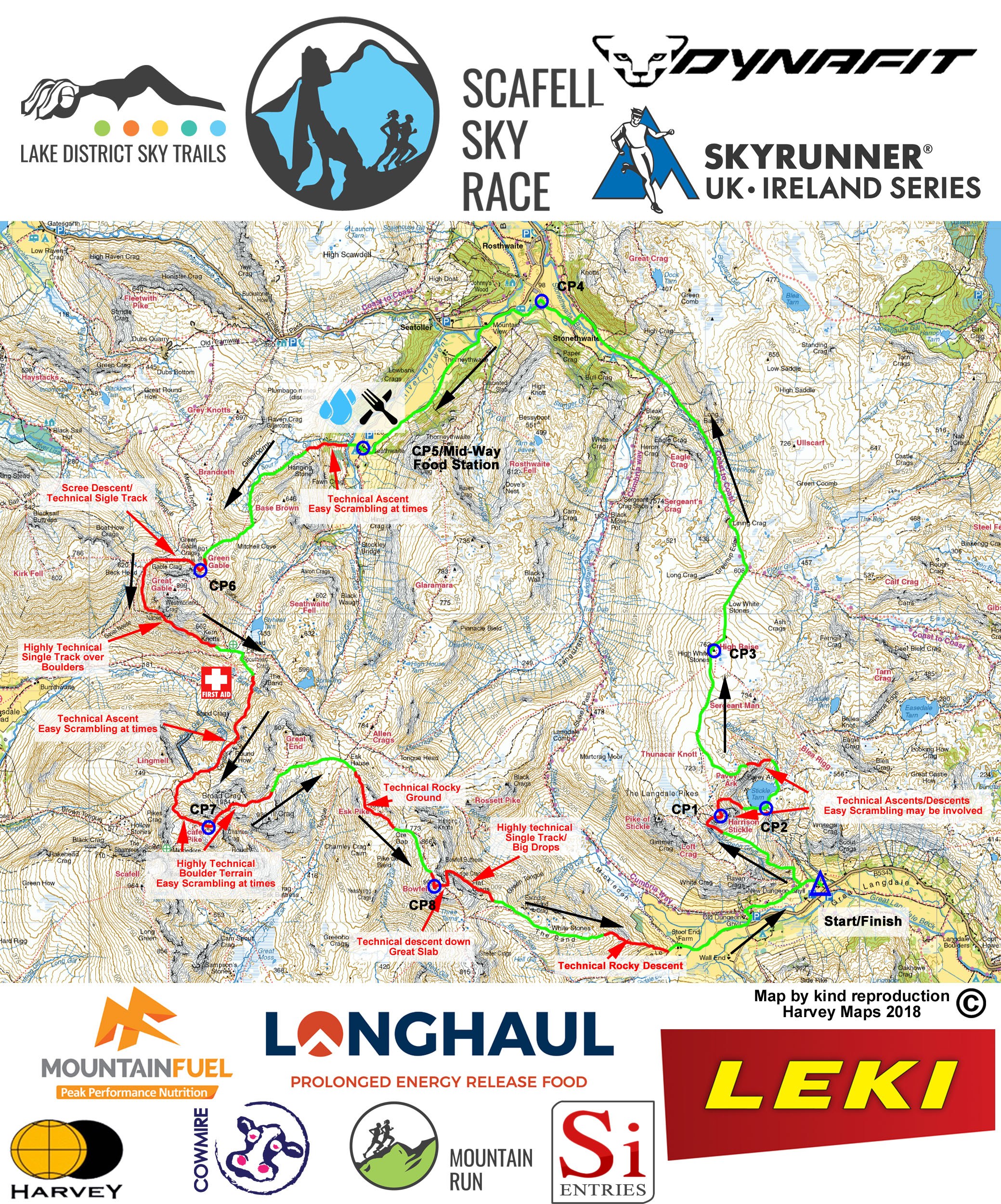 Provisional race route supplied for illustrative purposes only. Route amendments and updates may be made at the Race Director’s sole discretion. © Harvey Maps.

What to expect
expand_more

The adventure begins with a scenic drive to the 'new' events centre in Great Langdale at the National Trusts Stickle Barn pub.

The first climb takes you on a lung bursting ascent of Harrison Stickle, this is the first King of the Mountains (KoM) Super Stage and your chance to seal the win for the Leki Micro Trail Pro Running Poles.

From the summit drop down directly to Stickle Tarn and ascend behind Pavey Ark via 'Easy Gully' to the summit and the Langdale Common. Taking in High Raise, follow techy sihgle track into the bottom of Stonethwaite before bending round into Seathwaite and the only Food Station on route (CP5).

From Seathwaite Farm you join the 'original race route to start the ascent of the spectacular 'Sour Milk Gill' waterfalls and follow the track that winds up into the Gillercomb Valley, past Base Brown to the summit of Green Gable (End of the 2nd KoM Super Stage). A short sharp drop brings you to Windy Gap, the col between Great and Green Gable. Descend on scree, then weave your way around the waist of Great Gable on highlytechnical single-track – and don’t forget to look out for Napes Needle, first climbed in 1886 by William Hasket-Smith who did it solo and performed a handstand on the top just for fun!

Arriving at Sty Head Pass, you’ll begin one of the most classic and technical ascents of the Scafell Massif: the race goes via the 'Corridor Route' that leads directly to the summit of Scafell Pike, the highest mountain in England. From here, turn North East, making for the summit of Broad Crag and crossing wonderfully technical boulder fields on the way. The summit gained, you’ll set out towards the Great Langdale Valley, taking in Esk Pike and Ore Gap along the way. Summit Bow Fell, then you’ll drop down a very technical scree/rock slab descent, via Great Slab Gully, then revel in one of the best stretches of single-track in the Lakes, the ‘Climbers Traverse’ that weaves under Cambridge and Flat Crags. Descend into Great Langdale via the high ground of the Band to reach the Old Dungeon Ghyll pub and the final technical trail, that will destroy what is left of your legs before the last techy descent to the finish and all the glory you deserve.

A special-edition commemorative bottle of cider and a hot meal awaits you at the finish line.

The route is fully marked and flagged, and no navigational experience is required to follow the route, but is required as part of the race rules and regs. A safety team will be present on the hill, and there are 9 marshalled control points at high-level locations along the course.

In certain extreme conditions, a reduced Bad Weather Route may be used - this is shown in green on the map above. Designed with the safety of competitors and the race team in mind, the Bad Weather Route retains as much of the spirit of Scafell Sky Race™ as possible.

Use of the Bad Weather Route is at the Race Director’s sole discretion.

[Please Note: We might use a deviation of the Bad Weather Route to offer the best running in inclement weather conditions]